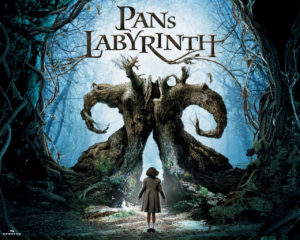 I am personally embarrassed that SquidFlicks has existed for a decade and has never given Guillermo Del Toro’s masterpiece it’s proper due review. That changes now. This is the quintessential primer to understand Del Toro’s fascination and talent at telling the ‘monster’ story through all his cinematic endeavors.

Set during the viciously violent (and often overlooked as a footnote during World War II) Francoist era in the years after the Spanish Civil War (1944), a young girl, Ofelia, along with her mother and unborn baby brother are escorted to a chateau in the dense forest of the Spanish countryside to bunker down with an enclave of fascist forces led by her adopted father, Captain Vidal.

Ofelia is an observant and whimsical child who adores reading – fairy tales most of all. It is her attention to the smallest details and an insatiable curiosity that lead her to discover the grounds of the chateau hold an ancient and mysterious secret – a labyrinth. Ofelia makes her way to the center, and encounters a faun (a creature from Greek mythology that resembles half-goat, half-man), who explains that she is the daughter of king of the underworld, the missing princess Moanna, and she must prove her essence is pure and has not been tainted by humankind by completing three tasks before the upcoming full moon.

The tasks grow in their challenge and danger, all while rebel forces encroach the chateau and Captain Vidal becomes increasingly violent, vicious, and paranoid of his surroundings. Ofelia attempts to gain supernatural help for her ailing mother, who is suffering severely from pregnancy complications. While the remedy seems to help, it is undermined when her mother tells her that there is no such thing as magic and that she has to grow up and move out of the world she dreams up in her fairy tales. With that, she falls critically ill and cannot be saved when the child is delivered.

The plot culminates when Ofelia has to fight her adoptive, increasingly unhinged, and monstrous father to save her baby brother and enter the gates of the underworld. Unfortunately, the final test she must complete – to spill the blood of an innocent – is the most difficult decision she will ever face, and she doesn’t have the luxury of time to make it. Will she assume her role as Princess Moanna, arbiter of peace and justice, or is she resigned to grow old and corrupt in the mortal realm?

Pan’s Labyrinth is an incredible and unusual film – it exists solely in a Spanish dub, with English subtitles prepared by Del Toro himself (who was disappointed in the captions that were crafted for earlier work, The Devil’s Backbone) so that the translation conveys the correct context and emotion throughout. It is a beautiful film that is not marred by studio interference and overreach – it is solely an execution of Del Toro’s exquisite vision as a creator and director.

The common theme with all of Guillermo Del Toro’s works, including Hellboy, and Pacific Rim, are that monsters exist across all realms. Often times the most terrifying monsters are the ones that live among us. We as humans are capable of monstrous behavior that we’d like to blame on the supernatural and mysterious. The sad reality is that we are solely responsible for creating and acting upon our worse demons far too often.

May you always strive to leave an impact on the world that is positive, and yet also “visible only to those who know where to look.”

Jumanji: Welcome to the Jungle

I run the place, and keep it clean. IT professional and child at heart. In my spare time I start half-baked businesses and try to finish my massive pile of in progress movie reviews. I also founded SquidFlicks, and its parent company, SPF Entertainment.