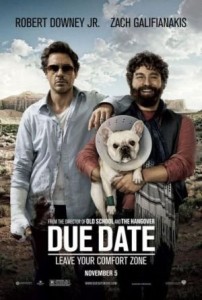 This was a guest review submitted by Ricky Holdman. Thanks Ricky! You can submit your own reviews to SquidFlicks here.

Like most movie genres, comedy for me is becoming…well…stale. What little interest I had in the Comedy Genre Died (R.I.P. 11/5/2010) after seeing ‘Due Date’.The jokes we’ve heard hundreds (literally) of times, unoriginal plot (two people who have nothing in common travel a long distance then randomly become friends at the end), rushed storyline, and hearing Robert Downey Jr drop the F-bomb every 5 minutes didn’t seem to fit. The only thing that saved this film for me, was the acting duo of Robert Downey Jr and Zach Galifianakis (they meshed oddly well). (Oh and for the record, My love for Zach Galifianakis is dying fast. He’s going to be like Michael Cerra, stuck to the same role every movie he is in. It gets old after the first couple of movies).

Here’s the plot in a nutshell: Peter Highman (Downey Jr) is flying from Atlanta to L.A. to get home to his pregnant wife. He is paired with Ethan Tremblay (Galifianakis) who is flying to L.A. to pursue a career in acting. Ethan gets Peter put on a no fly zone, where the two embark on a cross country roadtrip, with some mishaps on the way. *yawn*

Where the film lacked in original plot/storyline, it made up for in character development (sort of). We find out Ethan’s Dad dies in the film, which leads to a couple of emotional, heartfelt scenes. There is a scene where Peter is putting Ethan through an acting test, without going into much details, his real life situation bleeds into his acting excercise. For me, it made the movie a little more enjoyable. I actually felt an emotional connection to a character, which is what a majority of comedy films lack. So, even though the film was extremely rushed, there was surprisingly some character development.

The jokes, well, they are laughable, but not in a good way. You know when you are really frustrated and the only thing you can do is laugh? Yeah, it’s THAT kind of laughter. You had your drug jokes, sex jokes, breaking the law, gross out factors. None of those things are bad, but when the jokes that fall under those we’ve heard a thousand times.(i.e. they get aressted in Mexico because of Marijuna, they break out of jail and escape. Ethan jacking off in the car, perverted dog. Yada, Yada, Yada). If they would actually write jokes we haven’t heard in every other movie, it might be decent. I mean seriously, give us something fresh.

I was expecting something good, considering who the Director is (Todd Phillips) who directed probably my two favorite comedy films of all time: ‘Road Trip’ and ‘The Hangover’. For me, ‘Due Date’ turned out just “OK” for me. In all honesty, go watch ‘The Hangover’ instead of this film. Same jokes and a 20x better storyline. You won’t regret it.

The Lost Boys: The Tribe

In the Mouth of Madness

Behind the Mask: The Rise of Leslie Vernon