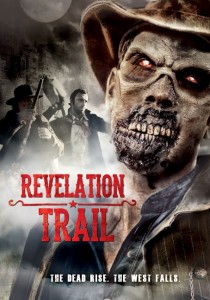 There is something so appealing when you take a Western setting and throw in some zombie carnage!  The story of “Revelation Trail” is an inspiring one to all independent filmmakers out there.  Shot in 20 days and on a budget of only $34,000 the film takes place “In the late nineteenth-century, a holy man known only as the Preacher (Daniel Van Thomas) confronts unspeakable evil as a gruesome power consumes the frontier. Standing between ruin and salvation, he joins forces with the town Marshal (Daniel Britt), a man with his own set of demons, in a savage fight against the risen dead and the evils of the living. Along the way, the men discover which lines they’re willing to cross in the name of survival and witness the depths people reach through the power of belief — for good and ill alike.”

Roughly a third of the film’s total production costs came from 172 online fans, who contributed amounts ranging from $1 to $1,000 via the crowd-sourcing website Kickstarter. Hundreds of dedicated talent from around the country — and some further — united to make director John Gibson’s story, an idea that dates back to 2006, a reality. A series of proof-of-concept trailers created out-of-pocket over the course of a weekend generated enough interest to put the feature into production. With complete creative control, the team at Living End Productions slept in garages, made brains out of ham slices, built guns from vacuum cleaner parts and shot sweeping vistas in their backyards. Generous locals from Kentucky, Illinois and Ohio provided their talent, weapons, clothing (though the wardrobe department dressed most of the extras for about $4 each, thanks to thrift stores), locations, food, horses and even cannons, with everyone from reenactors to school teachers pitching in. A team of volunteers constructed a period-accurate military fort during two weeks of downtime, mostly from discarded barn wood. A pure indie passion project, Revelation Trail has picked up a small cult of fans numbering in the thousands.

Entertainment One will release Revelation Trail on a feature-packed DVD throughout theUnited States and Canada on August 26, 2014, available at retailers including Walmart, Amazon, Best Buy, Kmart, Frys, FYE, Barnes and Noble, Sears and many more, with a release on streaming services in the coming months.

The Theory of Everything Trailer

I’ll be Back, in Terminator Genisys

Avatar is in the money!

The Theory of Everything Trailer